_How we touched the clouds - AWS re:invent 2019 seen with our eyes

Out of nearly four thousand available sessions organised in 6 hotels, we had to select the ones which were the most promising as far as the type (sessions, Workshop, Hands-on Labs, Dev Chats and many others) or the host were concerned, before others took the places available. In total, with over 60 thousand participants, registration to the sessions proved to be a challenge.

The second challenge was logistics and the reservations app which could reject a reservation when it decided that there was no chance to move between the selected sessions if they were held at different hotels.

We made the reservations we could. The other sessions ended up in the “Interests” tab. That meant that sessions would appear in the smartphone app (without which it would be hard to get around), but we would have no reservation; however, we could try to get in without a reservation – we’ll get back to that later on. 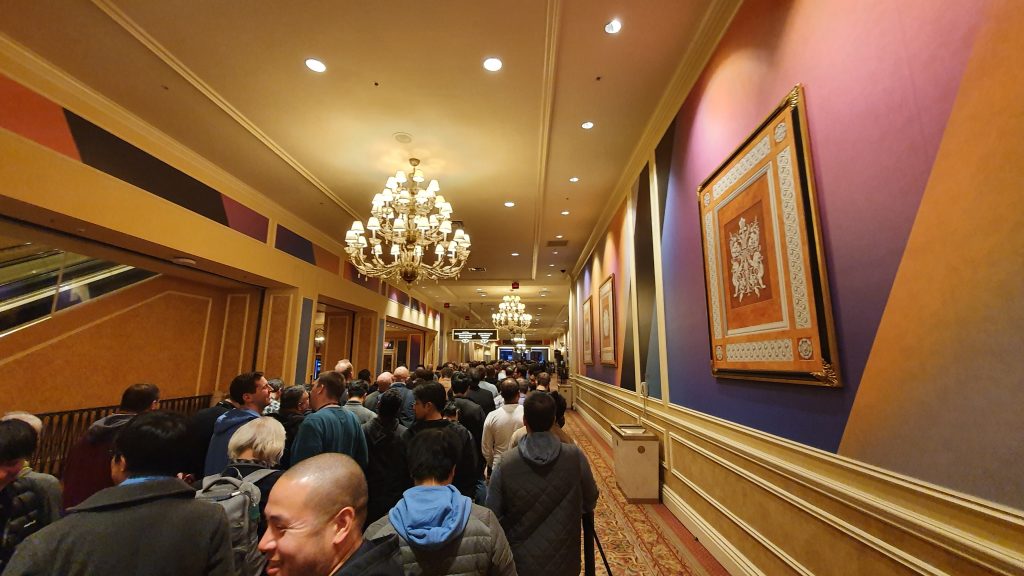 As far as persistence is concerned, in our case it meant sending an application for a US visa, more than 12 hours of flight, a queue to the immigration officer at Los Angeles Airport and 5 hours of waiting for the flight to Las Vegas; in total around 21 hours of travel. That is not counting the trip to Warsaw from which our flight was to leave.

The whole conference is organised in 6 hotels at the Las Vegas Strip Boulevard; the main attractions in this unique place are the hotels whose sizes make a huge impression. If it wasn’t for AWS stewards standing at every corner, signposts and Google maps with internal hotel maps, it would be difficult to know what is where and how to get there.

The distance between the two most distant hotels hosting our sessions was about 2.5 km. On top of that, we walked another 2.5 km inside the hotels. In general, the whole conference consisted of walking down kilometres of corridors in order to sit down for a while, listen to a session and walk to another place. That’s what each day looked like for us and the other 60 thousand people.

Don’t be mistaken in thinking that we had to walk everywhere; AWS provided transport between individual hotels. A fleet of buses ran from dawn till dusk, every 10 minutes on average. Transit time depended on the traffic situation at the time, but we had to plan around 30 to 40 minutes to travel between hotels due to traffic jams in the city.

Getting to the buses was another logistical problem. The exit of our hotel wing faced the Strip directly, close to the buses, something like a kilometre of corridors. It was a difficult decision to make: walk to our destination or take the bus. After two walks down the Strip, the bus became our favourite.

An interesting alternative to the buses was the self-driving monorail train running along the Strip. It allowed us to get close to most hotels fairly quickly, stopping at 7 stations. AWS provided conference participants with free tickets, which, however, started running out in the last two days of the event 😊

Looking back a few days later, a good plan would have been to select sessions in a single hotel during a particular day. There were meals in each of them, so we could have driven/walked to the selected one in the morning and stayed there all day. Some of us only spent full days at the Venetian hotel. 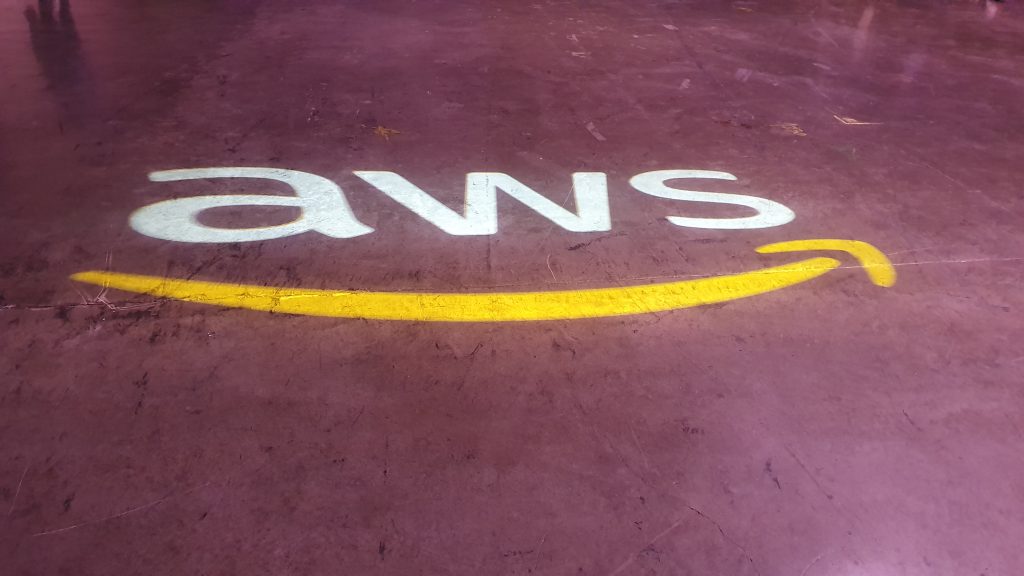 As I mentioned before, you had to make reservations for the sessions long before the conference. With a reservation you can enter a session. No reservation? Don’t worry. You can wait in a long queue and if there are free seats, you can come in. That’s why the queue to the most popular sessions formed even an hour before they were scheduled to start.

What if you don’t get in? You can always go to a room (there were a few of them in each hotel), for repeat sessions or those streamed from other rooms. You come in, put your earphones on and that’s it. The advantage of those rooms is tables with sockets (you can charge your phone/tablet), the disadvantage – you can’t ask questions after the session.

To get to all the attractions available at the conference you had to use an ID, which was scanned at every opportunity (except for buses and meals). At the entrance to the first session, I found out that my ID pass didn’t work. It happens to the best of us.

Apart from the sessions, the conference offered many other activities. The biggest one was probably the EXPO where you could visit hundreds of stands with cloud solutions connected with AWS, and more. If you made your data available for future direct marketing, you could get various gadgets (i.e. SWAG) – socks, T-shirts, bottle openers, little magnets, hammocks, or take part in drawing Lego sets.

Apart from that, there were chill out areas, quiet work rooms or meeting rooms, tables for games and live music. Oh, and you could win or lose a fortune at the casinos. 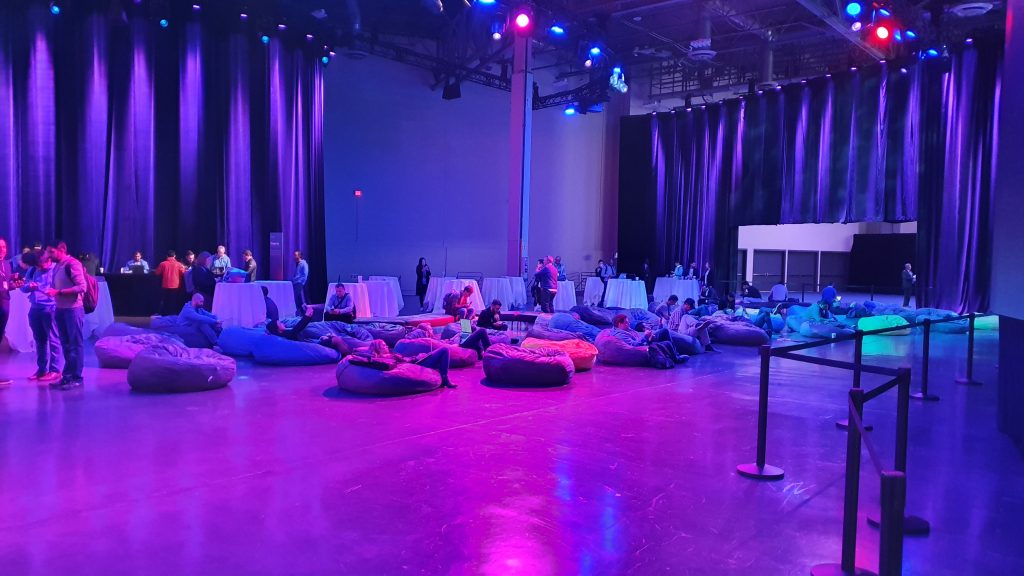 Another form of activity was a temporary examination centre where you could spend a few hours stepping into the shoes of a person writing questions and selecting the answer that fits the best. I thought there would be little interest in passing exams in Vegas but I was very wrong. Generally, most of the 100 examination stations were occupied. I went there, I passed. My advice is this: one day before the exam, stay away from parties, and yes, it’s not easy in Vegas.

During the conference there were competitions in autonomous AWS DeepRacer cars. With the capabilities of the model allowing to reach nearly 50 km/h and steering taught using the ML model, watching vehicles running off the track and crashing against the barrier was an interesting escape from the conference lectures where everything always works.

After six intense conference days packed with sessions, workshops and kilometres travelled on foot (111 095 steps) I have to say I was looking forward to sitting for 12 hours during the flight back to Poland. The conference is exhausting (and particularly hard on the feet, that’s why it’s worth taking super comfortable sports shoes).

In spite of the hurry, rush, jet lag, lack of sleep and a complete lack of time for oneself, half way through re:Invent, I made a decision: “next year I’m coming back”. The atmosphere and the scale of the conference is incredible and, in some way, addictive. Being able to network and have a relaxed discussion with your guru (let’s be honest, often over an evening drink) provide amazing opportunities to broaden your knowledge and in some way are the icing on the cake of the whole event.

So, see you next year, Vegas!

The most important novelties in our experts’ opinion

Having worked over 15 years in infrastructure management and building data centers , I was mostly interested in hardware and network solutions which AWS uses to provide services. This year, a lot of attention was given to network solutions and Nitro hypervisor developed by Amazon. I have to admit that the possibility of putting together a computing cluster with nodes connected with a 100GB network, comprising 106 thousand installations, leaves an impression.

Despite the fact that the use of quantum computers in business and everyday life is still a long way into the future, the announcement of the Amazon Braket service during this year’s AWS re:Invent made the biggest impression on me. It allows you to conduct experiments covering the implementation of quantum algorithms, simulating how they work on classical computers, as well as running them on actual quantum machines such as those produced by D-Wave, IonQ and Rigetti. Another novelty within this area is the launch of the research and development programme called Amazon Quantum Solutions Lab based on the premise of cooperation between AWS’s customers and quantum computing specialists. At present, few organisations in the world are able to invest in a quantum computer, which makes this technology difficult to access by programmers and scientists. I am happy that soon it will start to change, also through Amazon’s actions which will surely result in faster development of quantum information technology.

My heart always beats faster when I think about serverless. That is why I think that among the many novelties in this area, the most important one is the new HTTP API in the API Gateway service which can save even up to 70% and through which delays can be reduced by half compared to REST API. The implementation of the RDS Proxy service, which is a pool of connections to the MySQL database managed by AWS (in the future it will surely be developed to handle other databases) is equally important. With the elimination of cold starts in VPC which took place in September, it opens a variety of possibilities to build serverless systems integrated with existing relational databases, which are the most popular worldwide. This makes me optimistic about an even larger adoption of serverless by companies because it substantially widens the scope of applications.

Apart from serverless, I am a fan of and I hope for further development of AWS Outposts and AWS Local Zone. The first service allows for ordering hardware from AWS and placing it in one’s own data center. The second one is, for now, a “mini region”; there is just one in Los Angeles and it provides only selected services from AWS’s offer, connected only with networks and virtual machines. They are not impressive on their own, however, looking at their future potential, I hope that these two services will allow AWS to build mini, and ultimately, full regions, faster and cheaper. This makes my hopes for an AWS region in Poland grow.

Contact us
Transition Technologies PSC
NIP 729-271-23-88
Our branches worldwide
Legal
Privacy StatementGDPR
Sitemap
About usServicesSolutionsIndustriesSuccess StoriesInsightsContact
Social media
FacebookLinkedInYouTube
© Copyright TT PSC 2022. All rights reserved.
Loading...
We use cookies on our website to give you the most relevant experience by remembering your preferences and repeat visits. By clicking “Accept”, you consent to the use of ALL the cookies and rules of our privacy policy.
ACCEPT
Manage consent