This Sunday marked a big announcement for Microsoft, as they took it to Mobile World Congress Barcelona 2019 to publicly unveil their newest Mixed Reality wearable: the HoloLens 2 (you can see a recording of this presentation here). But will this newest piece of hardware, a significant upgrade over the disruptive HoloLens, finally make it from pilot- and demo-projects into actual production environments of organizations?

First, I must admit that I am yet to experience the HoloLens 2 firsthand. Unfortunately, I was not able to physically be in Barcelona over the last few days so for the time being I must rely on my colleagues’ impressions from using the hardware (such as this one). Below Paweł Wasilewski of Transition Technologies PSC trying on the new HoloLens 2 at MWC Barcelona 2019. 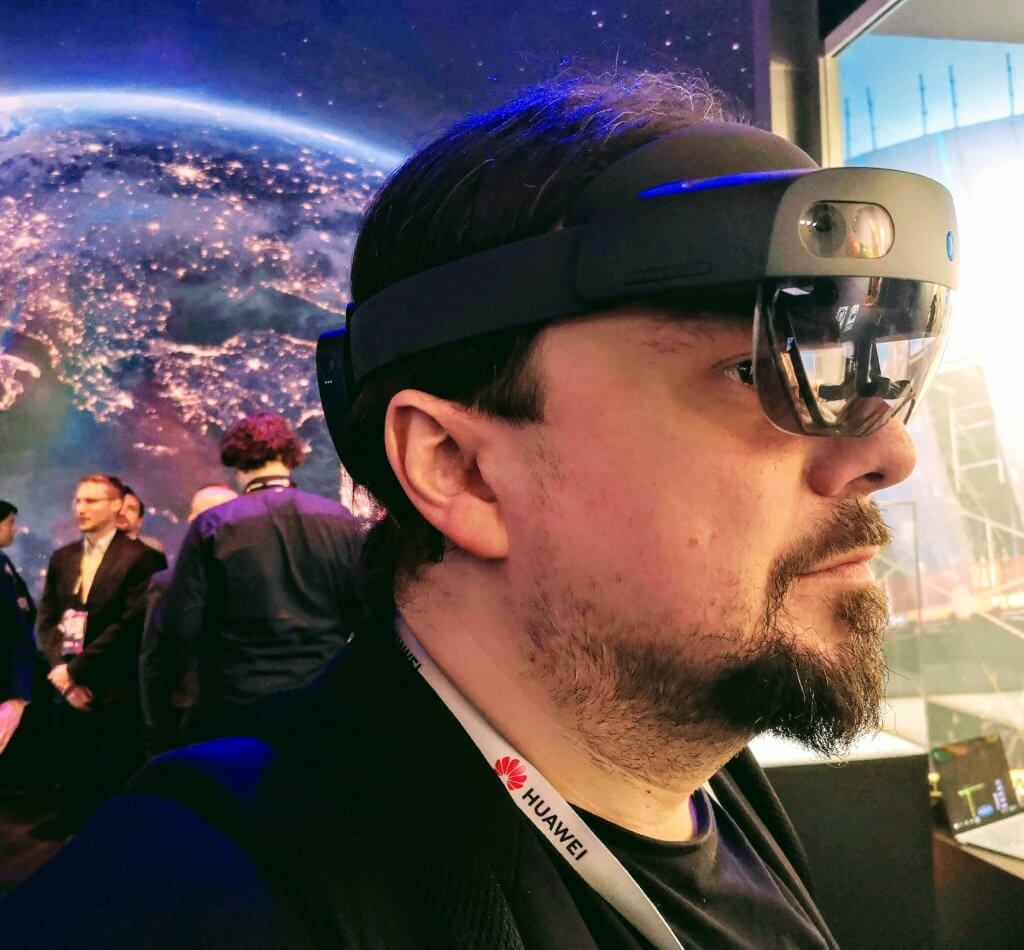 However, what they relayed is quite encouraging: The FOV (Field of View) is visibly improved (i.e. the size of the “screen” is larger), gaze-tracking seems to be working fine, a larger number of gestures is recognized, you can raise the vizor in case you need an unobscured view, the device is more comfortable to wear, logging in is simple thanks to biometric Windows Hello… You can even use it with your glasses on, which is not the case with, for example, Magic Leap One (you can buy prescription lenses for MLO, though). There’s even a company which is going to offer a hard hat with built-in HoloLens 2, called Trimble XR10, which will allow companies to utilize Mixed Reality in areas where personal protection equipment is needed, such as construction zones.

The list of features is indeed quite impressive, while the price tag of the device itself went down to $3,500.00 (or 30%) compared to the original HoloLens, which was $5,000.00 for the Enterprise Edition.

Due to the fact humans acquire knowledge quicker through AR trainings than through reading through 2D guides like printed manuals or PDF files (though extensive studies are yet to be published on that) AR has long been expected to be at least part of the solution for the problem of aging and retiring workforce. HoloLens gained lots of praise in that regard from multiple industrial customers who my organization worked with. Some even took it as far as implement it as a standard way of training new employees. With upgrades available in the newest version everybody is expecting adoption to speed up.

Heck, even the US Army announced it’s going to buy $480 million worth of HoloLens devices from Microsoft.

You might actually expect that HoloLens 2 will take the manufacturing industry by storm and make them a common tool supporting workers worldwide.

Whatever Microsoft’s claims might be about who they’re targeting with HoloLens 2, that device, much like its predecessor, is still not an industry-ready technology.

While it is more comfortable for longer periods of usage, its battery supposedly can only sustain 2-3 hours of operation on a single charge. That’s not exactly a full shift. If you’d like to equip a worker for the duration of an entire shift, you’d need at least two devices: one charging while the other is being used, which immediately bumps up the cost to $7,000.00. Per worker. Multiply that by the number of employees you’d like to equip with this undoubtedly magnificent piece of technology, and you’ll end up with a cost only the US Army can afford.

Yes, I admit – holograms are very nice and potentially useful in guiding less experienced people through performing more complicated tasks (at least when they’re performing them for the first time), but to be able to do that you need two things.

First, you’ll need resources to create 3D animations for each procedure you want to display in your shiny new HoloLens. While technology for that is more or less market-ready and available through products such as PTC’s Creo Illustrate and Vuforia Studio, it’s still not as simple to build them as, say, creating a PowerPoint animation. You still need people with appropriate skills who will write code for these visualizations and that, I daresay, is not a commodity among manufacturing companies. You can also ask some other company to build them for you, but that’ll add to the overall cost, which is already pretty steep, as I described above.

Secondly, even if you have people who can create those animations, or if you’re willing to pay for third-party services, you still might end up in a dead end if you don’t have decent-quality 3D models of devices you want to animate, with the possibility to actually do these animations or at least “explode” them. Unfortunately, unless you’re the OEM, you might find it pretty hard to get these models, which leaves you with 3D scanning, which in turn often results in poor quality. Take this video as an example:

You can clearly see which objects have been modelled in 3D and which have been scanned using a handheld sensor. Notice how not only are the scanned objects much less precise. What’s more, they also can’t be animated like the ones with pre-existing 3D models. In that case: a visualization of a production line, the level of detail and animation capabilities we had were completely sufficient. But would you really want your trainings to show blurry, inaccurate objects without step-by-step animations? Would such trainings really benefit workers?

Another important new feature announced last Sunday was the ability to have near-real-time multi-user interaction within one AR experience. However, that is in fact nothing new. Transition Technologies PSC built a similar technology for Vuforia Studio as well as the first HoloLens quite some time ago and it is available as part of their ABC solution for indoor space arrangement. (I’m pretty sure it’s extractable into other solutions if needed.

That leaves us with only one feature usable in real-world which is not entirely dependent on things like CAD model- and resource- availability, but then again not actually new: Remote Expert.

But why would you pay $7,000.00 for something you can have for $2,000.00 or less with a RealWear HMT-1 or a Vuzix M300, both of which are more rugged, have better battery life and are not as immersive as the HoloLens, allowing workers to focus on the real world they’re working in, and not the holographic experience? There are also tons of existing 2D guides, manuals, etc. laying (or “lying”?) around in organizations which can be used in a much more efficient way with these kinds of devices than are used currently, so you wouldn’t have to worry so much about creating new content.

I wrote a more detailed analysis of these kinds of devices and the concept of Assisted Reality which they introduce in July 2018. You can read it here.

Important step, but only a step

The first HoloLens was, indeed, a breakthrough. It made Mixed Reality (or whatever you call it) closer to existence than anything before it. HoloLens 2 builds on that and brings in a lot of improvements. It is an important step into progressing Augmented and Mixed Reality to a level when they can become mainstream, as well as a marvelous piece of engineering and a great display of what technology can do today. Kudos to Microsoft.

The problem is, though, that what technology can do today is still not what demanding environments of most industries need. If your pockets are deep and you want your organization to be ready for the moment when Mixed Reality becomes mainstream, then yes, you should buy HoloLens 2 and build at least a few solutions on it. In addition, if you really need to tackle the problem of the skills gap in your workforce, again, HoloLens 2 can help you with that today.

But if you are like most of us, trying to find the best bang for your buck and provide your employees with truly essential tools to do their jobs more efficiently and make less errors, you might be better off sticking with something else for now.

Selecting the best technology to address problems bugging industries depends on particular use cases. Certain hardware and software may be better suited to solve one kind of problems but won’t be able to even get close to solving another. In TT-PSC we pride ourselves in helping our customers choose the best tools to resolve problems within their businesses.

If you’d like advice on which direction you should head, feel free to reach out to me.

The new opportunities associated with Industry 4.0 require companies to adapt to the new environment. In this article, we take a closer look…
Read more
augmented-reality

Modern technologies are starting to affect literally every industry. Even though most activities related to Augmented Reality (AR) are in their infancy when…
Read more
augmented-reality

Modern technology is constantly changing, with newer and newer products, which develop services and the effectiveness of specialists' work coming out constantly. Since…
Read more
augmented-reality

Are you wondering how to enhance most of the processes in your company? How to eliminate production downtime, reduce the distance between your…
Read more
augmented-reality

Development of technology depends to a large extent on needs and problems of people who use it on a daily basis. Specialists and…
Read more
augmented-reality

In fact, 4.0 Industry is based on communication which has to be quick, accessible and unambiguous. Then, the received message makes decision-making process…
Read more
augmented-reality