Home / Blog / Cloud / Windchill Single Sign On – how to get from Amazon Web Services to Active Directory in a customer’s network?

_Windchill Single Sign On – how to get from Amazon Web Services to Active Directory in a customer's network?

One of customer’s migration point to Amazon Web Services was turning on SSO (Single Sign On) – as it’s quite convenient. After fast verification of the possibilities we have, it turned out that we can leverage ADFS. The customer already has ADFS deployed for other services, so there’s no need to convince Security Team that it is basically supposed to be used.

After a few days of a struggle with a complexity of Ping Federate, we managed to turn on SSO, make a nice redirection loop via mentioned ADFS. Returned SAML had everything we needed and Windchill said ”Error 500”.

A more thorough study of documents revealed that SSO with ADFS is definitely supported by Windchill, but creating a new user based on ADFS SAML response is not. Windchill needs user base for comparison, and this can be provided by querying domain’s controller with Idap, best with SSL.

We’ve got infrastructure deployed in AWS and domain controllers in customer’s server rooms. Exposing the controller to the world is not going to work with Security Team, but we have to query them somehow. 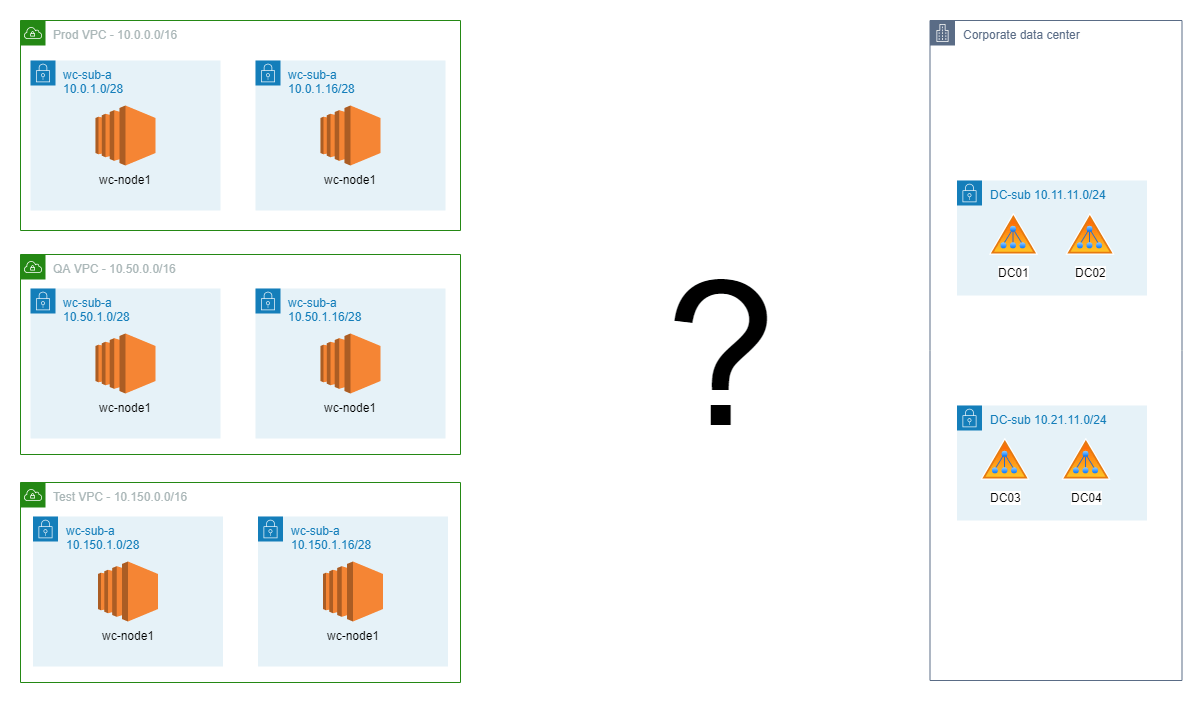 Let’s connect to a customer with VPN and query controllers through the tunnel with secure Idaps. But not to make things too easy, a few environments are already deployed in AWS, each of them in different VPC and each of them has to get to AD with its query. Each VPC with different subnet, overlapping customers on-prem networks.

What to do? How to manage?

There were a lot of options (the following are just a few of them): 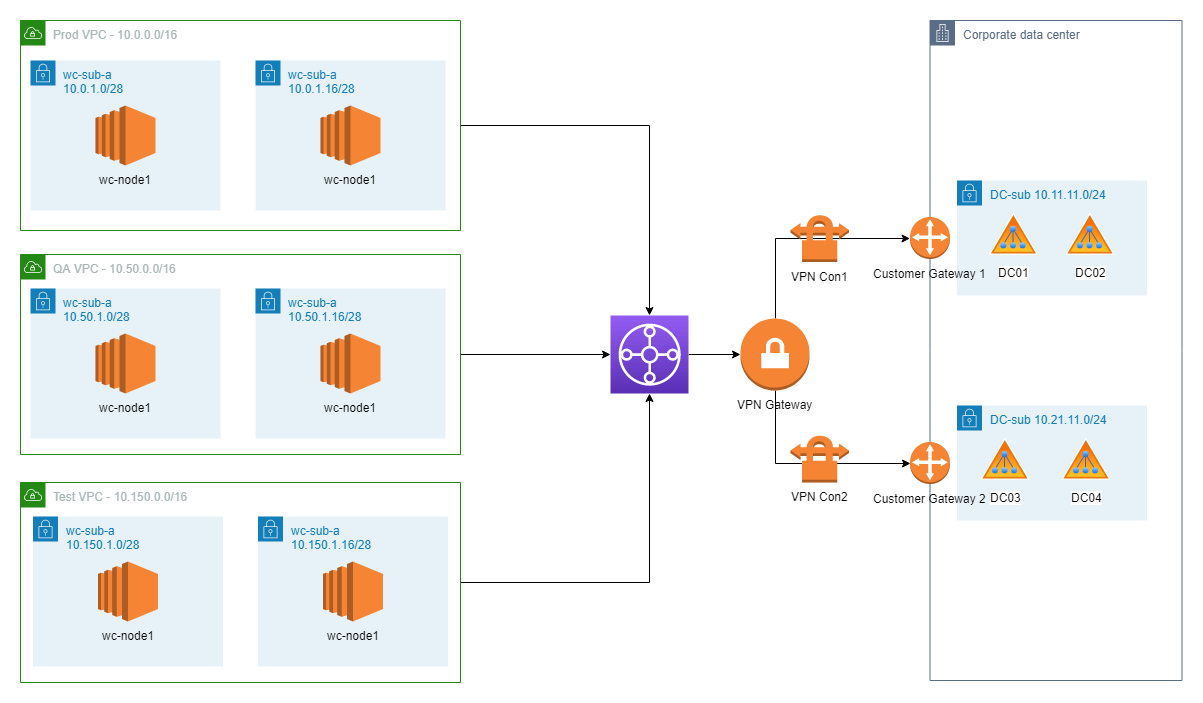 Unfortunately, already deployed VPCs have the same IP addresses as customer had in their network. It’s not that it cannot be dealt with, but the time was running out and playing with routing in a global organization could take years. 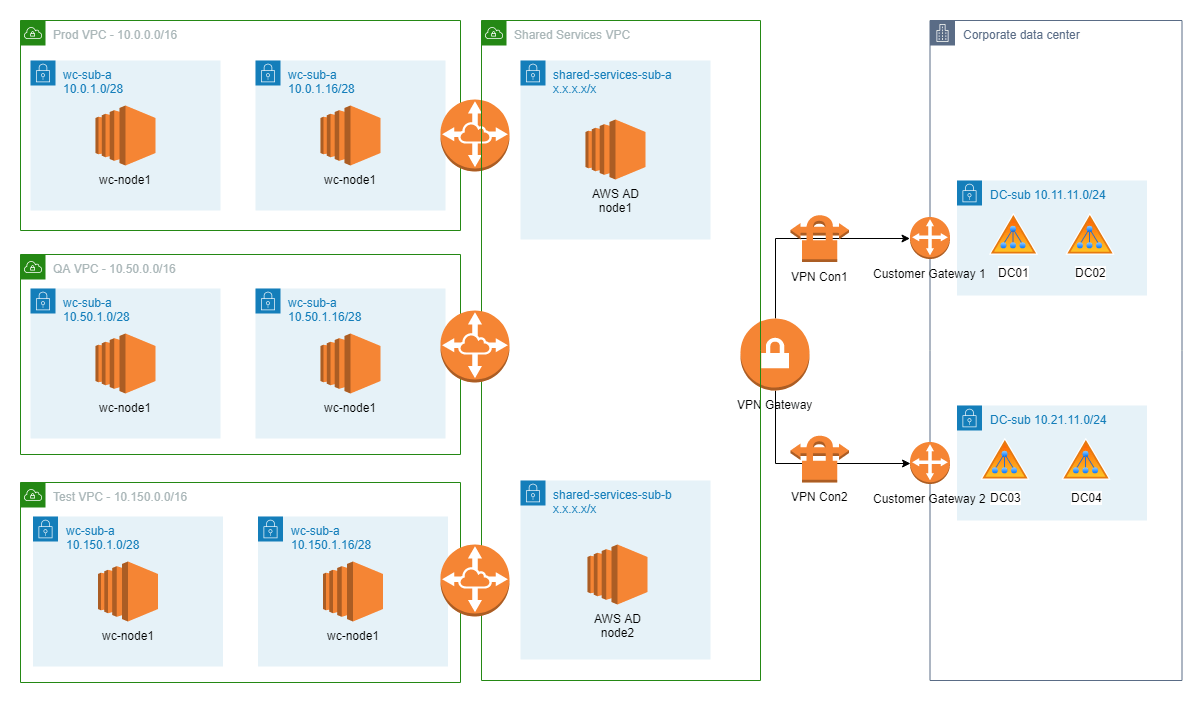 A short presentation in PowerPoint, which shed some light to the problem in the customer’s eyes, resulted in making a decision about creating a new VPC, doing the routing, peering VPCs, connecting VPN and deploy AWS Directory Service in Shared VPC.

In the meantime, not to block the development of some additional tools, we set standard Amazon Linux in Shared VPC, and using a simple SSH tunneling, we skipped a few limitations related with the lack of transit VPC in AWS.

Another try was setting a read-only domain controller in AWS. This solution provided the access to the application even in case of problems with VPN tunnels. Organizing VPN went surprisingly well and, basically, it worked with the first one so it was left this way.

We have already had it, read-only domain controller, it could be queried with Idap and everything was fine, but not for the customer’s Security, which had agreed for this scenario before. What to do, Security knows better and they will not give us a public key for the internal CA, because it’s not a public key, just the internal one – ohh, the great PKI mystery.

Driven by some emotions, we decided that we’ve had enough of this ‘dance’. Fast review of the situation:

Something like ldap proxy for Active Direcotry. We’re setting something like that in Shared, we’re throwing ldap queries into this proxy, it redirects us smoothly to customer’s AD and we’re successful.

Another 5 hours of attempts and ta-dah! – it’s working! OpenLDAP works. Verification in Windchill and the problem’s gone. EC2 with OpenLdap works and… actually it’s boring.

Hmm, maybe we should put it into a docker container?

Hmm, maybe we should run the container in ECS?

Building a container with LDAP Proxy on CentOS is basically just a few lines. Later on, a quick upload to ECR, task definition and service can be created.
But how to direct the traffic to the service? IP will be different every time container restarts. Maybe through LoadBalancer? – nope.

Defining Service, „Service Discovery” option can be used, which creates Hosted Zone in Route53 and updates A record, leading to the service – brilliant.

Now, it’s enough to associate VPC with Hosted Zone and shoot with Idaps queries to the name registered there.

Finally, not to pay special attention to that later on, it’s just enough to define an simple healthcheck, which will make ECS replace a broken container with a new one – within a minute. 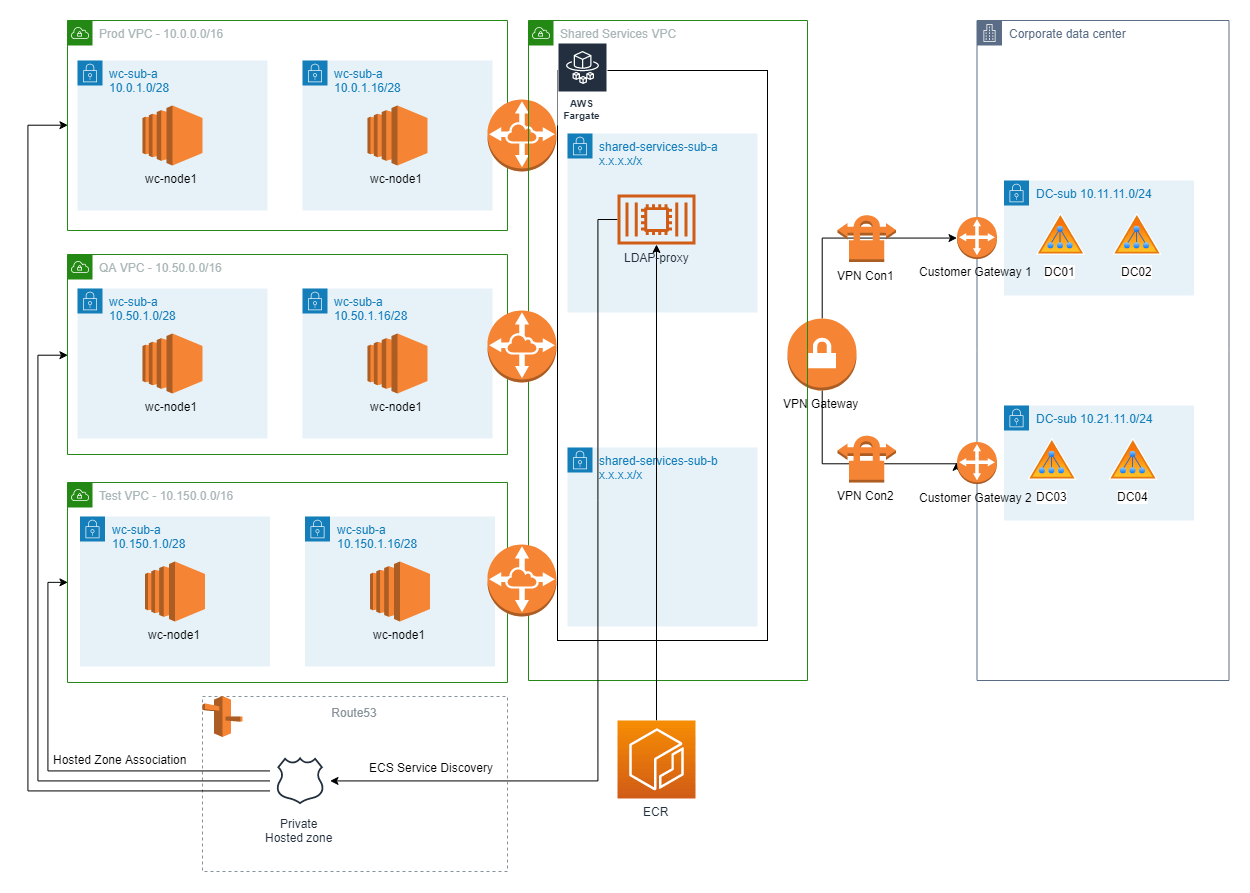 What about the cost (without VPN)?

Become a top example of a complete transition to Industry 4.0

Digital transformation and moving towards the idea of Industry 4.0 (I4.0) & Smart Factory (in AWS) are not easy. There are many obstacles…
Read more
cloud

The long-awaited 11th AWS re: Invent has just come to an end. Transition Technologies PSC marked its presence, among others, thanks to the…
Read more
cloud

How to get closer towards Industry 4.0?

How to implement Industry 4.0 smarter, faster, and easier?

The concept associated with Industry 4.0 is Smart Factory – in other words “intelligent factory”. This type of plant is based on integrated…
Read more
cloud

How to achieve AWS cloud cost optimization with FinOps?

The cloud is not on-premise, which means that IT purchases don't happen according to a strategic plan, but immediately when the architect provisions…
Read more
cloud

Driving digital transformation in the cloud

The cloud is a key success factor in digital transformation. It provides companies with many decisive advantages. However, the prerequisite for this is…
Read more
cloud

Serverless cmputing still raises a lot of doubts, especially among those environments that are just starting to use cloud services or are just…
Read more
cloud

DevOps is an innovative methodology that introduced a new quality of work on IT projects. It is based on the cooperation of autonomous…
Read more
cloud

According to "2019 State of the Cloud Report from Flexera" RightScale's report, 94% of companies use the cloud. It is no coincidence that…
Read more
cloud

The demand for Cloud specialists is dynamically growing. How to get a wide range of competences and quickly familiarize yourself with the subject…
Read more
cloud

The world we've known in recent years is changing a lot. It forces us to change our habits as well as the ways…
Read more
cloud

The AWS re:Invent 2019 conference, similarly to previous editions, was full of interesting lectures, such as breakout sessions, which aimed at familiarizing the…
Read more
cloud

Some time ago I was involved in a project that was to provide HA Windchill Cluster - actually, nothing new, the cluster itself…
Read more
cloud

How we touched the clouds – AWS re:invent 2019 seen with our eyes

Apart from the funding, participation in the AWS conference re:Invent requires engagement and a bit of persistence on the participants’ side. In our…
Read more
cloud

The use of modern technologies in medicine is getting more and more popular. Paper patient records are becoming obsolete and are being replaced…
Read more
cloud

Cloud computing is one of the world’s most rapidly developing technologies. It is successively replacing traditional server solutions, obtaining a larger and larger…
Read more
cloud

Every few years there is a new big thing in IT. Nowadays, all eyes are focused on Machine Learning (ML) and Artificial Intelligence…
Read more
cloud